Castell is a rich folk tradition in Catalonia, for which people gather at festivals to build human towers up to 8-10 people high! In the game, you run a castell team and are traveling around the various regions of Catalonia, recruiting castellers to your team, training new skills to build more impressive towers, and performing at festivals in the Catalan villages and towns. Do you have what it takes to be the best colla, or castell team, in the land?

A game of Castell takes place over the course of 10 rounds. Your goal is to recruit castellers from the regions of Catalonia, then build towers with those castellers to compete in the festivals. You’ll need to train your castellers in various skills so that you can build taller, wider, and more creative towers. The more diverse your performances and the better you tailor your towers to each audience, the higher your final score will be.

Harness your strength, balance, courage, and common sense to take your team to victory!

The theme for this game is really really nice. You are building human towers and taking part in festivals as part of the Catalonia cultural tradition of building Castells. This was probably the first board game that actually led me to later research the culture it describes. The strategy is complex enough to make the puzzle very engaging and not easy too master. The only criticism is some tiny production issues; the colours on some of the pieces don’t perfectly match corresponding places on the board and you have to dismantle the spinner every time you fold up the board which is a little awkward. That however, definitely shouldn't be a reason to pass up this unique, fun game. 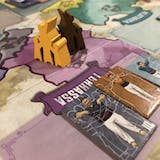 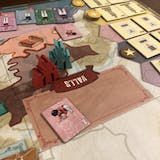 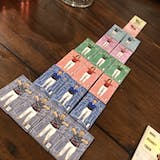 Signup for our newsletter
© 2020 Hobby Games.
Product has been added to your wishlist.
You can view your wishlist by creating or login account.
Please create account through ##customer_email## email
Login Register
1
×
Welcome Newcomer