Hive is a highly addictive strategic game for two players that is not restricted by a board and can be played anywhere on any flat surface. Hive is made up of twenty two pieces, eleven black and eleven white, resembling a variety of creatures each with a unique way of moving.

With no setting up to do, the game begins when the first piece is placed down. As the subsequent pieces are placed this forms a pattern that becomes the playing surface (the pieces themselves become the board). Unlike other such games, the pieces are never eliminated and not all have to be played. The object of the game is to totally surround your opponent's queen, while at the same time trying to block your opponent from doing likewise to your queen. The player to totally surround his opponent's queen wins the game.

Hive Pocket® is the travel version of the award-winning game, Hive! This version includes 26 beautifully crafted Hive pieces, a drawstring storage bag and two expansions to the game: ‘The Mosquito’ and ‘The Ladybug’.

This version is great for taking on trips where space is an issue or for backpacking where weight could be a problem. The pieces measure 25 mm across and 10 mm in depth and the whole game weighs only 200g including the bag, as compared to the full-size game which weighs 600g.

Hive is one of the most portable games around, it has no dice, no cards, no board, it is just those 22 near indestructible tiles.

You can sling it in a bag, take it to the beach, play on a small table in a coffee shop. The pocket version plays on the tray table of a plane and is perfect for anyone travelling light. 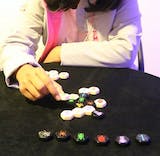 This game is amazing. There are so many different strategies you can try and yet it is very easy to learn what all the pieces do. It is well presented and I love the fact that you don't need a board. I often take it to cafes, pubs or out to dinner as it's super portable and also easy to clean if you get food etc on it.

This is the kind of game we can take to a cafe, the beach, or play as I’m waiting for the spuds to cook for tea! It’s my 13yr olds favourite. It’s simple to learn but there is strategy to winning. Nice and quick!

Signup for our newsletter
© 2021 Hobby Games.
Product has been added to your wishlist.
You can view your wishlist by creating or login account.
Please create account through ##customer_email## email
Login Register
0
×
Welcome Newcomer
x